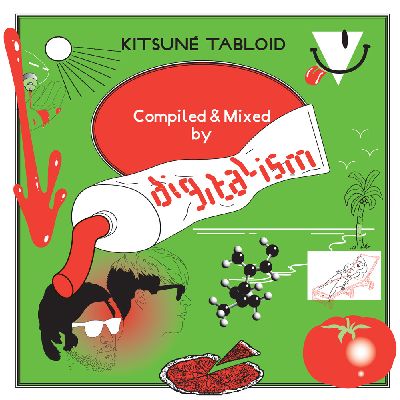 This is really not what I was expecting from a Digitalism DJ set. Instead of cutting edge electro, this compilation is mixed bag of white boy space disco, indie crossover and raw rock. In fact, this sounds like it could have been mixed by any number of random local warm-up DJs… To top things off, a lot of the mixing is as ruff as guts. While this sound has been saturating the Australian club scene for a few years now, perhaps it’s a sign that it’s just starting to infiltrate Germany? I probably would have shelved the disc if I wasn’t reviewing it, but after overcoming my initial disappointment – and with some repeated listening – I managed to find a soft spot for some of these ‘ugly duckling’ tunes.

The disc kicks off with a Sweaty remix, which improves significantly on the Muscles original by replacing his strained vocals with a chorus of cheerleaders. The first few tracks dwell in spacey disco and spastic funk territory, with Hercules & Love Affair, Holy Ghost and a surprisingly fresh sounding Human League dub, which could have been given a bit more airtime. The Midnight Juggernauts show why they own the scene with the glammed up End of an Era, then some hella 80s b-boy shit is represented with Space Cowboy by the Jonzun Crew. Calvin Harris’ simple and catchy Colours is thrown in and The Presets rent out the one of their weakest tracks, Yippiyo Ya, before CSS donate a trashcore remix of the B-52s.

The final section kicks it off with the Daft Punk-esque If I Was Wonderwoman by Hey Today. The main vocal sounds suspiciously like someone saying “I’m stoned already” in repeated falsetto. Hmm, I’m starting to wish I was too… The highlight of the album, however, is an absolute storming electro track called Dance in Dark by The Proxy. They ingeniously hijacked some evil basslines of doom from the drum n bass community and foil with it with a beautiful vocal from some Edith Piaf-style songbird. This tune is gonna be massive all over the shop. Relentless!

After overcoming my initial knee-jerk reaction to this compilation, I’ve realised there are some tracks on this album that I actually really enjoy for their camp and trashy wrongness. The Bears Are Coming (Metronomy Mix) is a great Prince-on-LSD impersonation, complete with spooky keyboards, cowbells and a vocal line about “acid rain”. This mix also exposed me to WhoMadeWho (where have I been hiding?!), with their catchy contribution The Plot. Elsewhere, The Kills’ Cheap and Cheerful is an instantly familiar piece of trash rock, like something you’d hear on a sexy Levis ad.

Overall this is more of a party warm up than the main event. There are some sleeper hits between the disco filler, but many of the songs could have been cut altogether. If you’re into the Cut Copy Fabric mix you might like this, but if you want some hard and dirty electro, try the Boys Noize’s Bugged Out instead.